For Example, I learned how to make a simple robot with several team members last spring. This was the first time that I made something moveable intelligence with my group members. when I was a child, I liked assembling 4WD toy racing cars with my friends. We saved almost all our pocket money to buy a better engine just to win the racing title. This time, we were trying to build a robot that is self-moveable, beautiful, and able to finish all the tasks. There was a target infrared beacon where the robot could land the ball on without any human contact; and the robot should be able to come back to the original starting line. therefore, my group members and I set a goal list for our robot：

When we set up the goals, we found that there was a lot of coding work to be done, so I voted to assemble the robot first, then we could write codes together and test it. I was doing it by myself for about 3 days to finish assembling the prototype robot and made small changes before doing the inspection. During assembling the robot, I could imagine what parts could do what things in the future tasks, and how are we going to change parts when something is broken, so I left some rooms for the future inspection just in case.

Writing codes is always the most difficult thing. We tested thousands of codes to make the prototype robot to finish the task. However, the prototype robot could not move to the beacon straightly when it detected the beacon. Tom (one of my group members) found a good way to solve it: “We could add two more infrared detectors on each corner of the front bumper so that the detectors could keep working and finding the right direction when the robot is moving forward, such as correcting the direction automatically when the car is moving”. But the code was extremely complicated. We took nearly 2 weeks to fix this problem and finally finished our tasks in the final test. This process has demonstrated the importance of cooperative learning – without a second person’s opinion and help, things would not have done so quickly and smoothly.

The learning process was painful, or even desperate, but we finished the test relying on our great interest and cooperative learning abilities. We were like working as a real team in a company when we were doing the robot together in that spring term. Everybody was doing their best and had their own advantages for this task even though some of them have four or five other courses. We sacrificed our spire times and study times to change the parts, rewrite the codes, and test in the lab. I was so happy that we had done it well and received a satisfying result. I was so proud of myself and my team members. 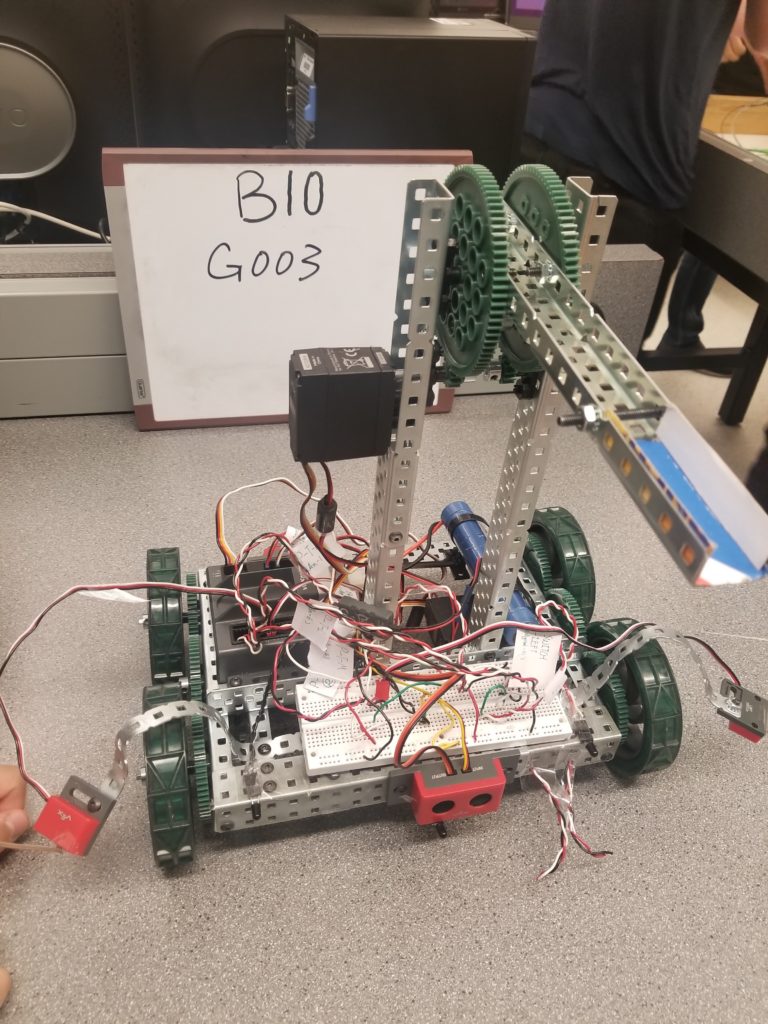 Here is a short video when we were testing the tasks. Hope you enjoy it!!